skip to main | skip to sidebar

Mixpo: Another Way to Get a Video WITHOUT Shooting

This is the Jivox video ad:


This is the CEO interview:


This is the how to:

Interested in learning more about Google's video adwords program? Get the info here.
Posted by Pam Strayer at 12:21 AM No comments:

Interview with Brad Inman of TurnHere.com

Turnhere.com just lowered its prices for small business videos from the already low, low, low price of $895 to a new low - $499.

Here's an interview from Sept. with TurnHere CEO Brad Inman.

And here's how it works:

Web video marketing doesn't stand on its own - its tied to search engine optimization, social media distribution, and many other online marketing variables.

Last year, Tube Mogul was the biggest breakthrough in getting your video posted onto multiple video outlets - no more uploading videos to YouTube, Vimeo, Facebook, etc. one by one. Tube Mogul handled all of these submissions for you at one time.

TG also separates the audio from your video and submits it to 16 podcast directories.

They also help you with video creation - for a fee.

A new feature announced on their blog converts your video to transcription - also for a fee of $100 per hour...you could go to elance and do much better (like $25 or less for someone in Sri Lanka or India to transcribe your video).

Visit Traffic Geyser to learn more about their product in four free videos they make available. They also offer a 30-day free pass.

Strangely, or smartly? enough, they don't have a company channel on YouTube. What does that tell you?
Posted by Pam Strayer at 10:59 AM 1 comment:

I am happy to report back that the one day class on Web Video Marketing I taught yesterday in downtown SF through U.C. Berkeley's Extension's marketing program was a great hit - thanks to the wonderful folks who participated. It was a small, intimate group of like-minded people, who came from the differing worlds of established brands, government-funded institutions, and a classic Bay Area type - a startup.

The class was an overview of the more in-depth course I will be giving starting Nov. 10 in downtown SF on Tuesday nights.

"Pam's great! Very knowledgeable...she knows SO much and is willing to share. Great course! It should be advertised more widely. Anyone in charge of internet marketing should take this class."

"Very practical. Received clear information about video production options (some for only $500). Geared toward my level of technical skill so recommendations can be implemented."

I'm excited about the positive feedback and writing the textbook that will accompany the longer course. Please sign up on the Berkeley Extension web site - it's quick, easy and painless.

The class covers:
• Web Video Overview (conversion rates, success stories)
• Must Have Types of Videos (home page intro, product overviews, news, more)
• Make or Buy Decision Points (pros and cons of each and when to use which)
• Do It Yourself Options - from simple to complex
• Buy Options - from $150 to $500 and up for a complete video
• Distribution (how to include video in emails, where to distribute your videos, and sites that shortcut the distribution process)
• Tracking (free analytics tools and what they offer)

Guest speakers from many Bay Area companies have also been invited to present in the class.

Hope you can make it. Sign up or learn more here.
Posted by Pam Strayer at 5:37 PM No comments: 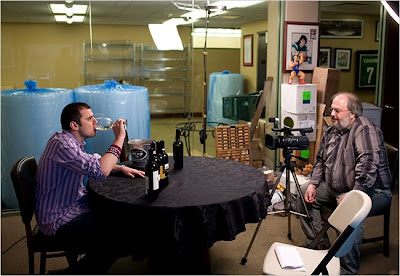 Aside from restaurants and hotels, I can't think of another industry which has so embraced online web video marketing the way the wine industry has. I guess all those things that make us feel glowy and happy lend themselves to contact highs on video. Or how else to describe the way web video is catching on.

The grandaddy of them all, Gary Vaynerchuk, who says his video blog WineLibraryTV has helped him to grow to a more than $50 million a year business.

A great new story appeared on Gary, including news of his upcoming $1 million 10-book contract with a major publisher, in the NYTimes last week. You can read it here.

Now my email inbox today brings news of the Wine Spectator's video contest - 70 videos vying for the top prize. Most look like they were professionally directed.

Here's a sample - a wine rap song, pitting Eastern makers against Western makers. Being from Oakland, I always find white rappers a bit strange, but still fun nonetheless. Another features a wine detective story, one is about kosher wine, and another spoofs Arnold Schwarzeneger and Charlie's Angels. My favorite is the old world wine versus new world wine, in the PC versus Mac spoof subgenre.

My only beef - video embedding not allowed (by Wine Spectator). Guys, get with it. Videos are supposed to be viral.

But carping aside, go see the entries and vote for your personal favorite. See here.

In the meantime, enjoy last year's grand prize winner here. Entitled Wine and the City, it's a parody of...you name it.

Interested in learning more about how to use web video (and YouTube) to market and run your small business? This blog's for you.

Pam is a video consultant and producer who helps businesses use web video for internal and external communications. A digital pioneer since 1992, when she directed the first video made on a computer (Apple's Quicktime 1.0 debut, in the bestselling CD-ROM From Alice to Ocean), she has been evangelizing video for companies large and small (Apple, Wells Fargo and others). Jerry Garcia, UN Sec. Gen Bhoutros Bhoutros Ghali and the Dalai Lama are just a few of her clients. Her passion for helping friends and family make simple personal videos spawned her bestselling 2005 book Create Your Own Digital Movies. Her web video efforts have expanded to internal Enterprise 2.0 projects for Wells Fargo, where the internal video channel she started is the employees' top-rated content. She teaches web video marketing in Oakland at Techliminal.com and in San Francisco for U. C. Berkeley Extension, offering the first university sponsored class in web video marketing. Pam was also featured recently in Fox's Small Business portal on her five tips for web video marketing success.

Interested in making personal videos? Check out my other blog: