skip to main | skip to sidebar

iMovie09 - Run to the Store NOW

I have been playing around with iMovie 09 this week, which took a lot of courage. After the debacle of iMovie 08, which I couldn't figure out for the life of me, and the earlier love affair with iMovie HD, which I adored, I clung to David Pogue's slightly put down review of 09 on the basis of losing its export to tape function.

While I couldn't agree more and beg, plead and whine to Apple (in store, online, posting a comment at the bottom of the Pogue column), Apple Has Spoken. So Far.

Once I could focus on actually Using iMovie 09, to do a quickie edit (carving up an 8 hour conference video into the individual presentations) that didn't require much deep thought, I began to be thrilled.

Whiz, whiz - the edited footage was scooped up, lassoed, and plopped into place. Maps...hmmm...new...looks like the old Road Trip Effect code I put in my 2005 book Create Your Own Digital Movies. But wait - it's much more. And it's soooo fast? It IS so fast. Plop, plop - here I can plink down some titles. Awesome. It took awhile to sort out the audio editing process in iMovie, but it does make sense. It does however require relearning old habits. Some good, some bad in that.

The upshot was however, that my video took all of about 5 minutes to edit. It would have taken at least an hour in the old style iMovie HD. Hmmm. Moral dilemma now. What do I say to my trustworthy faithful horse? For now, it's a fond farewell.

All went well until I went to upload the conference video. YouTube is no longer free for more than 100MB or 10 min. So with 30- and 60-min. 336 MB+ files, it was off to Google Video I went. But then the default window opens on Google Video, larger by far than on YouTube, and the quality was atrocious. My lovely world maps were blurred almost beyond recognition. Was it something I could control?

I spent a bit of time on the phone with Apple tech support. First with the iMovie specialist, who walked through various paths with me - intelligently and patiently and competently. Though I try to steer clear of actually using Final Cut Express, I do own a copy and wondered if exporting it from FCE would improve the quality of my uploaded video. An FCE rep asked for my support code, which I didn't have and informed me that it would $199 per incident to talk to her. Wow. That's more expensive than a call girl. After I explained that the information I was seeking was related to a capabilities issue form a sales and technical perspective rather than my actual USE of the software, she was very helpful. But ultimately I was transferred back to another iMovie person who walked through even more detail. Yet, in the end, the method I had used was the best one and the solution lay not in the creation side of the fence but in the publishing side.

Slow moving dolt that I was, I finally had a reason to go to Vimeo, where videos Look Good. I did a test post last night. I'm sold.

PS I have been telling people for some time to use iMovie HD for rough cuts or producer's cuts and encouraging people to hand off the roughs to real editors using FCP for quite some time. I just noticed Apple actually promoting this idea. Right on.

PS2 Take the iMovie 90 min. class at your local Apple store. Awesome. They'll show you how to open up the Advanced Features (under Preferences) which is what really sold me on iMovie 09. But better than that, for everyone, is the hands on approach in the class. No more show and tell. It's show and do. And did I mention - it's FREE?
Posted by Pam Strayer at 9:12 AM No comments:

I used the same res files shot with the same cameras for both of these:

GOOGLE VIDEO
Due to the fact that YouTube won't accept videos of more than 100MB or 10 minutes, I used Google Video's upload service, which I am grateful still exists. However, this lovely feature is going to go away. So upload while you still may! And get into their search results. The videos already uploaded before March 30, 2009 will remain online.

VIMEO
Quality is higher - but at a price. You can upload 500MB each week for free. Otherwise, pay $59.95 for a year license with 1G limit per month.


Green Plans Conference - New Zealand from pam strayer on Vimeo.
Posted by Pam Strayer at 8:29 AM No comments:

See what you think...and then add a comment on this blog:

What did you think?
Posted by Pam Strayer at 3:54 PM No comments:

I have blogged and written about Animoto for businesses in the past, but just want to point to an extremely good example. Unfortunately, the animoto videos do not seem to be embeddable, so I'll just link to it here.

See the SmartSheet.com video now.
Posted by Pam Strayer at 3:58 PM No comments:

Embedr: Make Your Own Playlists

You know how you can now watch video on a bunch of different sites? It used to be just YOuTube, but now there's dozens of sites.

If you want to aggregate all your videos from a variety of sites into a single playlist there's a new site for you!

Read about it in the ReadWriteWeb article.

What I like about Embedr from a marketing perspective is the site feature that allows others to explore your playlists...Consider the possibilities. Just another social channel for your videos - and one more reason to make them!
Posted by Pam Strayer at 8:21 AM No comments:

How do you get to go from being a TV Guide writer to a job at NYU? How do you pitch your new book? Well, if you are Jeff Jarvis, author of What Would Google Do?, you master new media.

Here's his book web site - look at the numerous videos, some self-produced using his FLIP camcorder.

And his book is due to be the first video book from HarperCollins - yet another new media promotion as well as product.
Posted by Pam Strayer at 9:58 AM No comments: 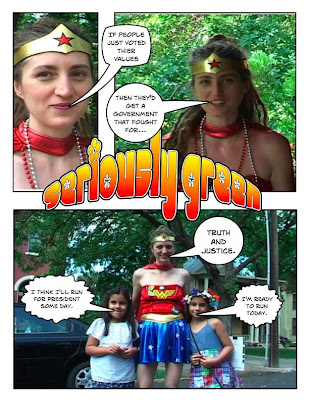 It's supereasy to use cartoon-icized photos to add va va va voom to your visuals. Of course, you have to have visuals to start with, but let's say you've got some of your own - or you've found some creative commons licensed ones on Flickr that allow your use as well as modification. That narrows it down to millions.

First, go to SeriouslyGreen.org and see how cute and cool their graphics on the opening screen are. Example above.

Second, go to plasq.com and buy ComicLife (available for Mac or Windows) and start adding captions to yo stuff. (There are probably other programs, too; I just happen to use this one.)

Third, post away, adding to your site, blog posts, etc. and see if your images get a little viral.

Fourth, let me know how it works out!
Posted by Pam Strayer at 11:01 AM No comments:

Interested in learning more about how to use web video (and YouTube) to market and run your small business? This blog's for you.

Pam is a video consultant and producer who helps businesses use web video for internal and external communications. A digital pioneer since 1992, when she directed the first video made on a computer (Apple's Quicktime 1.0 debut, in the bestselling CD-ROM From Alice to Ocean), she has been evangelizing video for companies large and small (Apple, Wells Fargo and others). Jerry Garcia, UN Sec. Gen Bhoutros Bhoutros Ghali and the Dalai Lama are just a few of her clients. Her passion for helping friends and family make simple personal videos spawned her bestselling 2005 book Create Your Own Digital Movies. Her web video efforts have expanded to internal Enterprise 2.0 projects for Wells Fargo, where the internal video channel she started is the employees' top-rated content. She teaches web video marketing in Oakland at Techliminal.com and in San Francisco for U. C. Berkeley Extension, offering the first university sponsored class in web video marketing. Pam was also featured recently in Fox's Small Business portal on her five tips for web video marketing success.

Interested in making personal videos? Check out my other blog: